I’m going to begin this post by saying how good I am feeling. My health is still rubbish, but in myself I am feeling so much happier. This, in part, is due to some hard work and medication, but also the unconditional support offered by many of you. Thank you.

I have been in need of two operations for around 18 months now. These operations have been delayed for numerous reasons, but I have waited patiently because the hospital I use is one of the best in the country, and so I have to accept the complication of long waiting lists for non urgent operations. From the view of the hospital, it hasn’t been 18 months, because I was referred for a (failed) operation at another hospital. Anyway, I have some progress to report! I have a surgeon clinic appointment in mid August. This isn’t a guarantee, however, because the last time I got an appointment it was cancelled on the day, when we had already arrived…

Work wise I have been rather busy! I’m the Guest Blogger for St Mary’s Hospice, Ulverston, using their platform to discuss issues surrounding Palliative Care, end of life and life limiting illness. My first blog post discusses the grieving process which surrounds the diagnosis of a degenerative condition, the fact that this is cyclical and that there are always new components of self to grieve. If you would like to read it, please click the pink underlined words above.

In other news I have been invited to join the editorial team of the Student Pages magazine, with a particular focus on Literary/ Literacy segments. This is an exciting time and I am looking forward to getting to work!

I went down to London in June, to the awards ceremony of The Wicked Young Writers Awards 2019. I have entered these awards every year since its conception nine years ago, this year being my first year in the final. The theatre, after some assistance from a very helpful friend (thank you! You know who you are!) was accessible, so I was able to be onstage with everyone else. I was announced as the RUNNER UP in the For Good category for my essay on Hospice and Personal Experience. You can read it here on page 186. I feel humbled to have gotten so far in this award, because there were over 4,500 entries into the competition. Not only that, but I met Cressida Cowell (author of How To Train Your Dragon) who also tweeted me after the ceremony. That evening mum and I saw Wicked the Musical, which looked at the theme of complexities behind a seemingly clear cut situation. The theatre as a whole became part of the lighting and set. 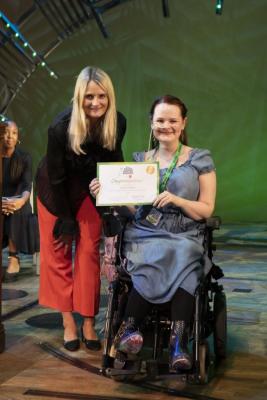 I have also finished my Breakthrough Graphic Novel Script! I am so excited to be working with the uber talented illustrator Michael Lightfoot, who will be bringing my script to life on the page. If you would like to hear the clip from the occasion I was on Smooth Radio discussing Breakthrough here.

I can’t leave out one lovely new addition from this post. Kim and Chris Anderson welcomed New Baby Ally nine weeks ago. She’s such a gorgeous little dot. I went to see them all when Ally and the family when she was very new, as pictured.

In reflection of all of this, and relating to the title, I realise how much illness has given me despite taking so much. It has allowed me the space and opportunity to develop my skills and embark on a career I didn’t think possible. It has meant that I have spend a lot of time doing procedures and sat in hospital waiting rooms; but illness has also forced me to reevaluate my previously seemingly ‘concrete’ choices.